Art.2. (1) The nonprofit association shall conduct its activity under the name “Bulgarian Association of Plastic, Reconstructive and Aesthetic Surgery” which may additionally be written in other languages. (2) Each written statement on behalf of the Association shall contain its name, seat, address, registration information, including its BULSTAT number.

Art.3. The seat of the Bulgarian Association of Plastic, Reconstructive and Aesthetic Surgery is 1431 Sofia, 1 Georgi Sofiyski Blvd., Clinic of Plastic Surgery of the Medical University – Sofia, District of Triaditsa.

ІV. DEFINITION OF THE CONDUCTED ACTIVITY

Art.4. The Association conducts its activity for private benefit pursuant to art. 2 of the LNPLE, using its means and property to cooperate with, support and counsel central and regional government bodies and other institutions, where medical specialists work, in all matters relating to plastic, reconstructive and aesthetic surgery.

Art.5. The Association aims at:

Art.6. In order to achieve its objectives the Association shall work towards:

Art.7. The Association works towards the improvement of the level of higher medical education and post-graduate qualification in plastic, reconstructive and aesthetic surgery.
Art.8. The Association organizes individually or together with other unions, associations, charters, etc.:

Art.10. The Bulgarian Association of Plastic, Reconstructive and Aesthetic Surgery shall not conduct for-profit activities.

Art.10. The Association shall not be limited by term.

Art.11. (1) Members of the Association can be competent natural persons who comply with the current Articles of Association, pay their membership fees and meet the requirements for the respective membership levels, established herein. (2) Foreign citizens who are prominent specialists in the field of plastic, reconstructive and aesthetic surgery may become members of the Association if they comply with the current Articles of Association and do not promote ideological and religious philosophies, are not barred from visiting the Republic of Bulgaria and do not work against the interests of our country.
(3) Members of the Association can also be legal entities whose activity is related to plastic, reconstructive and aesthetic surgery.

X. ADMISSION OF NEW MEMBERS AND TERMINATION OF MEMBERSHIP

Art.28. The Board of Directors consists of at least five full members of the Association.
Art.29. (1) The Board of Directors manages the matters of the Association and represents it according to the current Articles of Association.
(2) The BOD members can be part of other bodies and committees within the Association.
Art.30. (1) The BOD is run by a Chairman, elected from among the BOD members with a direct and secret vote from the GA.
(2) A BOD member might be dismissed due to a prolonged illness, long absence from the country or other valid reasons when the individual is unable to observe his/her duties.
(3) A new member from the GA is elected for any vacated BOD seat with the same term as the term of the current BOD.
(4) The BOD has a term of three years. The old one continues to perform its functions until the election of a new one.
(5) The BOD consists of a Chairman, Deputy Chairman, Secretary of Science, Secretary of Organizational Matters and a Treasurer.
(6) The Secretary of Organizational Matters should provide support to the Chairman and the Deputy Chairman, coordinate the activities of the committees, help with the organization of scientific forums, create and supervise the structure and activity of the post-graduate register, create and supervise a list of the practitioners on the territory of the country, with or without speciality qualifications.
(7) The Treasurer monitors and manages the financial matters of the Association. He/she supervises the membership fee payment, payment of fees and liabilities to third parties, rents or liabilities, maintenance of a website, negotiates with representatives from companies concerning the sponsorship of the events of BULAPRAS or on the website. The activity of the Treasurer is coordinated with the BOD of BULAPRAS and supervised by the Inspection Committee.
(8) As part of the structure of the Association there is also a technical secretary the amount paid to whom is determined by the BOD. The Association also has financial relations with a lawyer, accountant as well as in regard to services related to website maintenance. Art.31. The BOD has the following rights:

Art.36. A budget is set for each calendar year. It is accounted for annually observing the Accountancy Act and other regulatory acts in force. 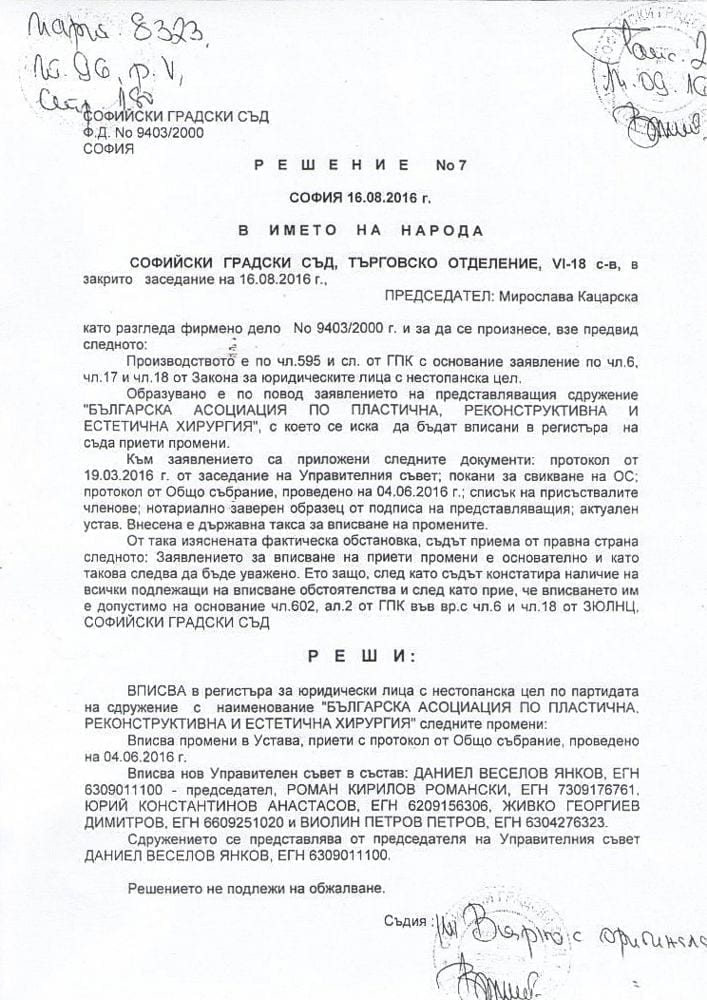